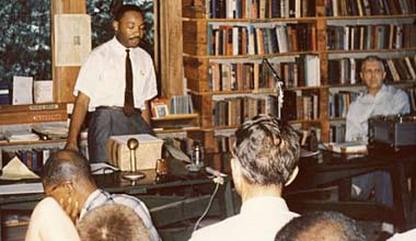 The Highlander Folk School celebrated their 25th Anniversary between August 30th and September 2nd of 1957 at their Monteagle location in Tennessee. Some of the attendees at this celebration were Martin Luther King Jr., Rosa Parks, Ralph Abernathy, and Pete Seeger (CRDL). Rosa Parks had actually attended this school. Martin Luther King Jr. gave a speech at this celebration, which was mentioned on the invitation sent out to guests (TKC). The speech that he gave at this celebration was supposed to be about “Looking towards the future” according to the letter written to King from Myles Horton (Stanford). There is a transcript from the recording of this speech that shows that he not only talked about looking towards the future, he also thanked Rosa, Abernathy, and the Highlander school for doing what they have done and continue to do to help create equal rights. On the invitation there was also mentioning of the Dean of the University of Chicago’s Rockefeller Memorial Chapel, John B. Thompson, would chair the seminar; Pete Seeger would be singing folk songs; and Ralph Tefferteller would call the square dancing (TKC).

All of the uproar about the Highlander Folk School being a communist school, and the photo of Martin Luther King Jr. sitting next to Berry, led the state of Tennessee to close the school in 1961, but it reopened later in Knoxville. The communist remarks and letters to the FBI continued showing up about the Highlander school even after they closed and reopened.